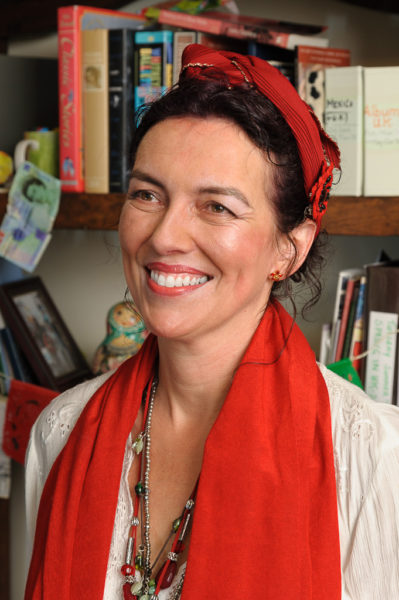 Barbara was born in the Netherlands to Dutch parents, and grew up in Kent in the south east of England. She lived in the United States in 1984/5 where she studied English and American Literature at the University of California, San Diego (UCSD).

On returning to England, she enrolled at King’s College London where she earned a BA first class honours degree in English Language and Literature (1988). After working as a researcher at the Open College and press assistant at the charity Scope, both in London, Barbara registered at the University of Warwick to study for a doctorate under the supervision of Professor Helen Taylor. She completed her PhD on “Popular/post feminism and popular literature” in 1994 and taught women’s literature at Thames Valley University (now the University of West London). During this period she published her first journalistic articles, in The Face and The Big Issue.

In 1995 Barbara moved to Mexico, working first as a copy editor and then a writer for the English-language newspaper The Mexico City Times. She became editor of the arts section, and started her first travel column (“Travel Talk”) as well as a bi-monthly food column, reviewing restaurants in Mexico City.

After working for the Toronto Star’s Latin American bureau as editorial assistant, from 2000 onwards Barbara devoted herself to freelance writing, specialising in travel and environmental law. She wrote for Fodor’s travel guides, covering both Mexico and Honduras, and for the Bureau of National Affairs in Washington where she reported on changes in Mexico’s environmental law.

In 2003 her first book, Mexico Chic, was published and met with considerable success. In 2004 she began researching the history, lives and feats of the world famous Acapulco cliff divers for the book Holiday in Mexico, which gave her the idea for her forthcoming book Heroes of the Pacific. She has also written about her research with the cliff divers for two academic publications on the Anthropology of Tourism.

As a journalist, Barbara has published extensively in the United Kingdom, Mexico and the United States. She has written for many different newspapers, magazines and websites, including The Times of London, The Houston Chronicle, The Boston Globe, palabra, Travesias and Gatopardo magazines, The Observer, The Scotsman and The Daily Telegraph.

While she currently lives in Kent, Barbara has ongoing projects in Mexico. She divides her time between writing, editing and voluntary work to support vulnerable women in the local community … and travelling, when she can!